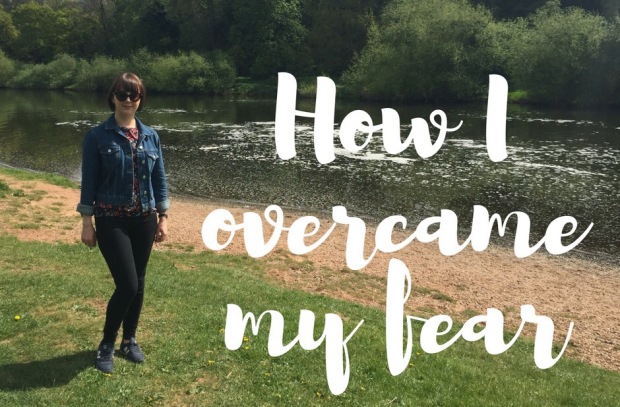 This is a much more personal post than usual, so be nice! I’m careful about what I share online, but some things are important to talk about. Which is why I want to talk about my phobia.

For almost as long as I can remember I have been scared of spiders. For a while it was just quite a strong dislike, but over the years it built up and became more than that.

It’s hard to avoid spiders and I had quite a few unpleasant run-ins with them. This started to affect me in quite a low level way. I tried to avoid anything which might increase my chances of meeting a spider. If there was ever one in the house, I felt panicked and couldn’t relax until it was gone.

I knew they were harmless but it didnt make any difference.

How things got worse

Last year I was driving to work when I noticed a big ass spider crawling across the windscreen in front of me. The combination of being in a confined space, not able to get out, and in such close proximity to a spider was terrifying.

Luckily I had just pulled in so I was able to park up, but the experience was genuinely traumatic. Had I been in a different part of my journey I would have crashed the car – but to me the thought of the spider touching me was far worse than the thought of crashing!

After that my phobia took on a new element. I became fearful of being in the car. I was on edge almost constantly. I was always on the lookout for spiders. Basically, I lived on high alert.

Even to me now, this sounds ridiculous. And I knew then that it was totally irrational. But I can’t stress enough how real it is when you have a phobia. I thought that a spider touching me was the worst thing that could happen, even though I didn’t know why.

I got in touch with my local IAPT (improving access to pyschological therapies) service and, after a telephone assessment I was referred for support. This took the form of exposure therapy, which basically gradually gets you used to the thing you’re afraid of and changes your reaction to it. A phobia is a learnt behaviour, so you essentially have to unlearn it (to paraphrase Yoda).

I had avoided spiders in all their forms for a long time, so I had to start off looking at pictures. At first I was a wreck just looking at pictures, but it’s amazing how quickly it starts to have an effect. I had to look at three different pictures every day for three minutes each. Pretty soon this task went from panic-inducing to boring.

Next up we had to introduce the element of surprise. So I bought some plastic spiders and my boyfriend hid them around the house for me to come across as I would a real spider. As with the pictures, I soon got used to this and it didn’t have much of an effect any more.

That was more or less it from the NHS support I got, because by that time my phobia had reduced enough to not to trigger clinical levels any more. I was really pleased with the progress I had made but I knew I still had a bit of work to do. The next step was for me to touch a spider.

Because over time exposure kind of wears off, you need to go a bit further to make sure you don’t go back to square one. It’s something you have to keep ‘topped up’. Also, because I had never touched a spider and that was the thing I had been most afraid of, it was like a final barrier to overcome my fear.

I booked myself on to the Friendly Spider Programme at London Zoo. This claims to essentially ‘cure’ people of their phobia, culminating in a couple of hours around real spiders and the chance to hold a tarantula. I felt quite calm about this because I had already done the ground work and reduced my fear by a long way.

On the day we had two talks – one about phobias, and one about spiders. They were both really interesting. The first talk helped my understand a little bit about how my phobia had developed, and the second talk helped me start to consider spiders as what they really are – vulnerable creatures just trying to survive.

Finally the big moment came to touch a house spider, and it was a lot more difficult than I was expecting. With the encouragement of the ZSL staff and a kind of staged approach, I let the spider run across my hand and then had a go at poking it around a tub. Next up, I held Katie the tarantula.

I thought this would be far easier than it was, and it was touch and go as to whether I would actually do it. Again, with the help of the staff I managed to do it. I haven’t included the photo because I wanted other aracnaphobes to be able to read this post!

So, that’s it. I’m haven’t fully ‘overcome’ my fear – I think it’s more of a process you have to keep working on. But I’ve definitely made huge strides and done something I never ever thought I would do.

I think phobias are quite misunderstood in a few ways. First of all, people think you can just stop being afraid of something. They tell you it can’t hurt you – but it doesn’t help because you know that already.

Secondly, people don’t understand how severe it can be. So you don’t like spiders – so what, right? How often do you even see them? But for someone with a serious phobia, the constant threat of coming across the thing they are afraid of is enough to be a problem in itself. Plus, their state of heightened awareness means they see them a lot more than you might think. A phobia is an anxiety disorder. It’s not a case of just not liking something.

I guess some people might read this and think I was stupid for being so scared of something so small and harmless. Part of me thinks that myself! But we all struggle with something, and it isn’t weak to ask for help. So you’ve got an issue like this, pick up that phone and make the call!

9 thoughts on “How I overcame my fear”

How many book related photos is too many? Asking for a friend 😂
It’s been a bloody long time since I had one of these! I was still on the system but with a phone number which hasn’t been mine for 16 years (GDPR anyone?) 😂 I don’t live in the most affluent area and I admit I wasn’t sure what to expect from my local library. But it was lovely and I’ve left with a warm and fuzzy community kind of feeling (as well as ‘Autumn’ by Ali Smith). Cheers @mynottingham, another reason to be proud of this city which has always been ‘for the many’, whatever is going on elsewhere in the country. #mynottingham
Bury me in @dauntbooks 📚
When you have the dress sense of a two year old #twinning #frillysockgang
Everyone on Instagram: Happy Valentines Day to my amazing partner! Me and James: ...
Never read any Hemingway until now. Newsflash: he’s quite good 😂